I was raised in Thief River Falls, Minnesota—not far from the town of Crookston. I managed to grow up without any kleptomaniac tendencies. Instead, I caught the writing bug in second grade after winning a prize for a story about my dog (scroll down to see the story in my own handwriting).

As a young adult, I was almost murdered in a basement apartment. A miracle from God saved me and I moved to Southern California where I met the man of my dreams.

Three months into our marriage, I was diagnosed with Type I Diabetes but was able to have 3 healthy children yet still keep my hand in writing by editing newsletters for church and MOPS groups, not forgetting my second-grade dreams of novel writing.

In 2017 I quit teaching elementary school full-time to pursue my childhood writing dreams. I substitute teach in elementary schools to support my goals and have derived character and story inspiration from the students and situations I have encountered.

I love to inspire others, especially diabetics. When I was first diagnosed, I thought diabetes was a death sentence, but now I see it as an equation to live by:

In second grade, I won first prize in my class writing contest with a story about a wiener dog named Noodles. The prize was a recycled picture of a panda from a calendar, which remains a cherished piece of ephemera from my childhood. 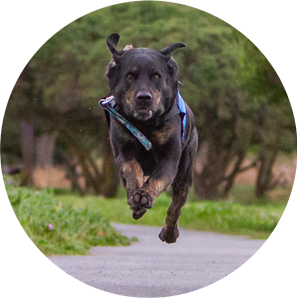 Hello! My name is Aiden and I’m a brindle, black lab originally raised to be a guide dog for the blind but career changed to Dogs for Diabetics, where my super-sniffer learned to detect low blood sugars. I was placed with my handler, Christy, in August 2017 and am at her side, 24/7, saving her life countless times by alerting her before it becomes an emergency.

Our first week together, Christy’s family went to get take-out. Christy’s blood sugar dropped to a dangerous low of 30 and I found her on the kitchen floor, close to losing consciousness. I slurped her face and she smiled, then gave me a command. “Go get!” I ran to the coffee table and grabbed a bottle of glucose tablets, saving her life.

Once when we were at a hotel, Christy had a low in the middle of the night. She was on the floor again, but I didn’t know where to find the glucose tablets, so I jumped on her sleeping sister, waking her up to help Christy.

Christy can tell you more stories of how I’ve saved her life countless times since being placed together. But, if you want to get to know me more, read my Service Dog Blog.