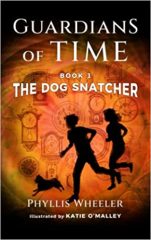 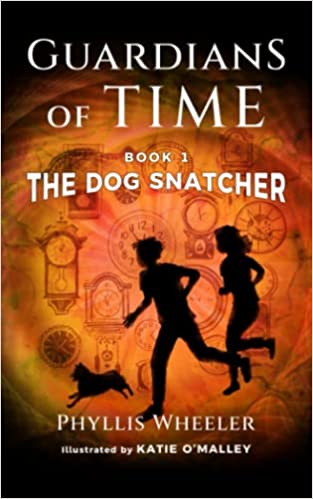 As a middle-grade book writer (for those of you who don’t know what that means, it’s the age group of third through eighth grade but is not limited to that age group), I tend to read books in my genre. I love books about dogs, and I love my age group.

That’s why I’m excited to review Phyllis Wheeler’s new book, The Dog Snatcher – book one in the Guardians of Time series (released November 1, 2022).

Doesn’t everyone dream of what it would be like to go back in time?

Children love this kind of story as it makes their imaginations run wild. As a former teacher who often served recess duty, I would hear the children using their creativity during playtime. Time travel was definitely part of it.

In The Dog Snatcher, a magic key found at the end of a driveway leads eleven-year-old Jake and his twin sister to a clock shop that helps them travel in time to help find their stolen dog. Many adventures and mishaps ensue for a page-turning read.

It’s a great read for new chapter-book readers, as the chapters are short and illustrated with delightful pictures to enhance the reader’s imagination. I highly recommend this book and look forward to its sequels.

Buy The Dog Snatcher on Amazon 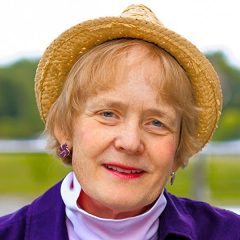 Phyllis Wheeler, a homeschooling veteran, loves time-travel stories with a bit of fantasy thrown in. She writes books for kids that feature strong families and a moral compass.

Phyllis is the author of The Long Shadow, a time-travel tale that won a Purple Dragonfly Award and a Moonbeam Award. She and her husband live in St. Louis, where she tends her milkweed garden and hopes for butterflies. 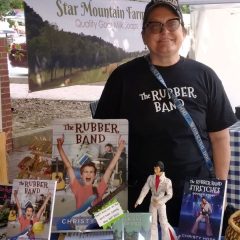 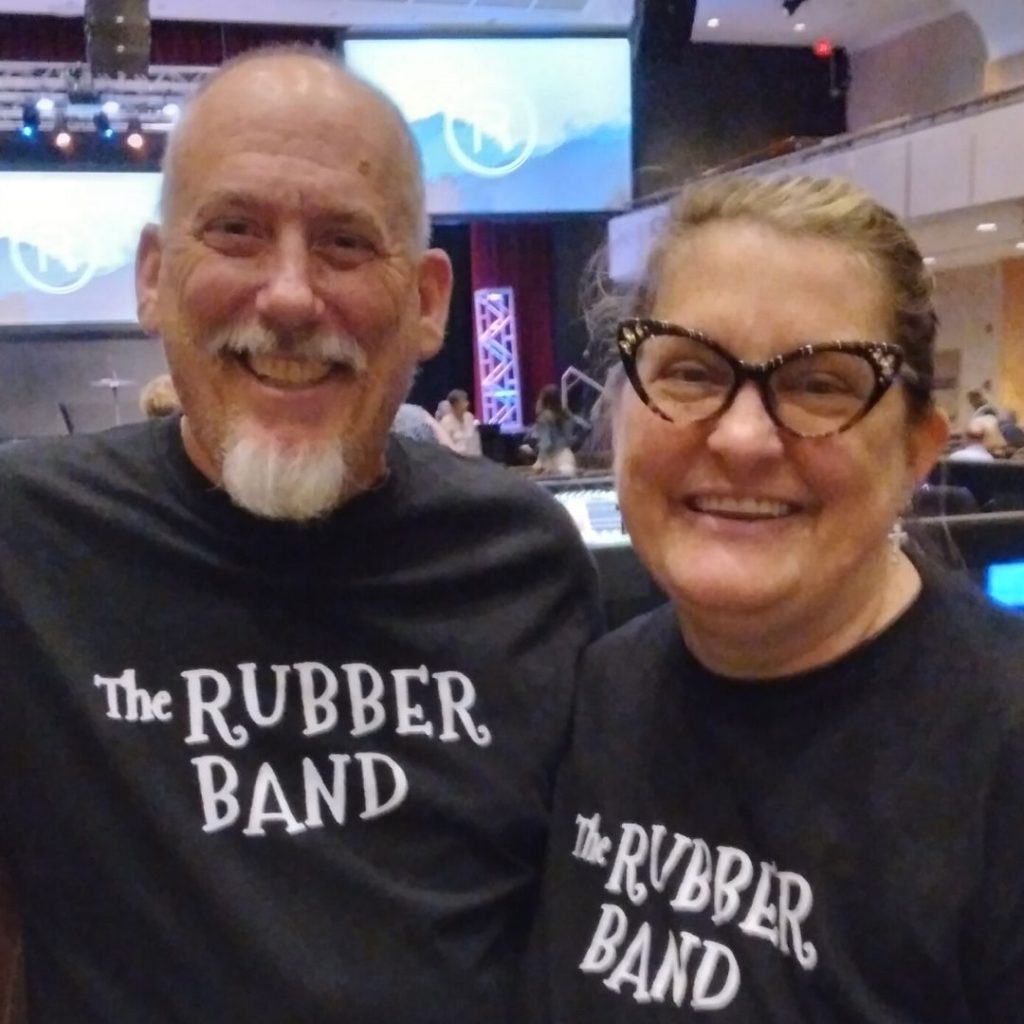 As I write this, Kevin and I are attending our first writer’s conference together, the Blue Ridge Mountains Christian Writer’s Conference. 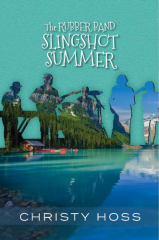 Childbirth is hard, but so is publishing a book. The fun part is writing; the hard part is refining, editing, communicating, cover art, and many other things that a reader may not realize happens before they hold the hard copy in their hands and turn the first page.

Most authors must do all the marketing themselves. I recently enjoyed marketing by sharing a booth with a family friend at a local fair. 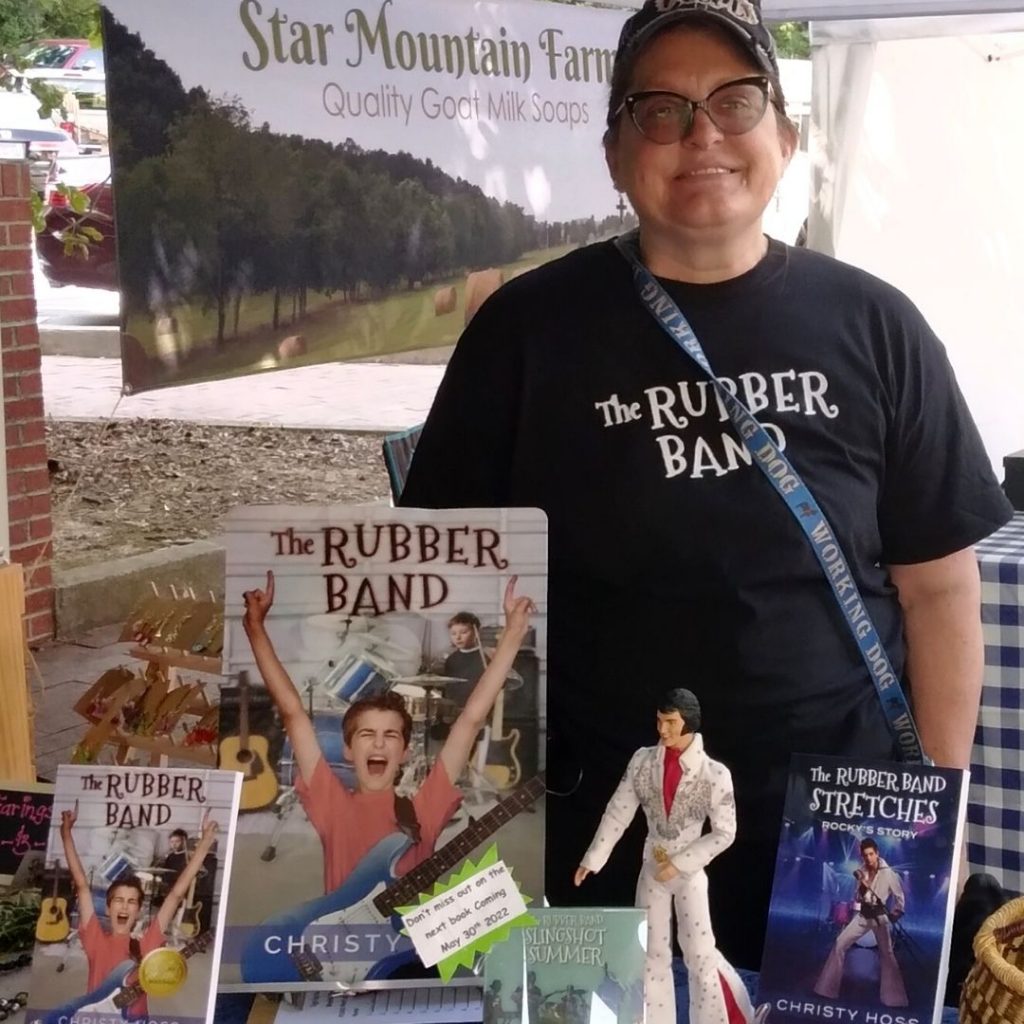 I loved talking to interested readers and making connections which I hope will turn into speaking engagements.

The Rocky-as-Elvis prop drew interest, and I had a few posers. 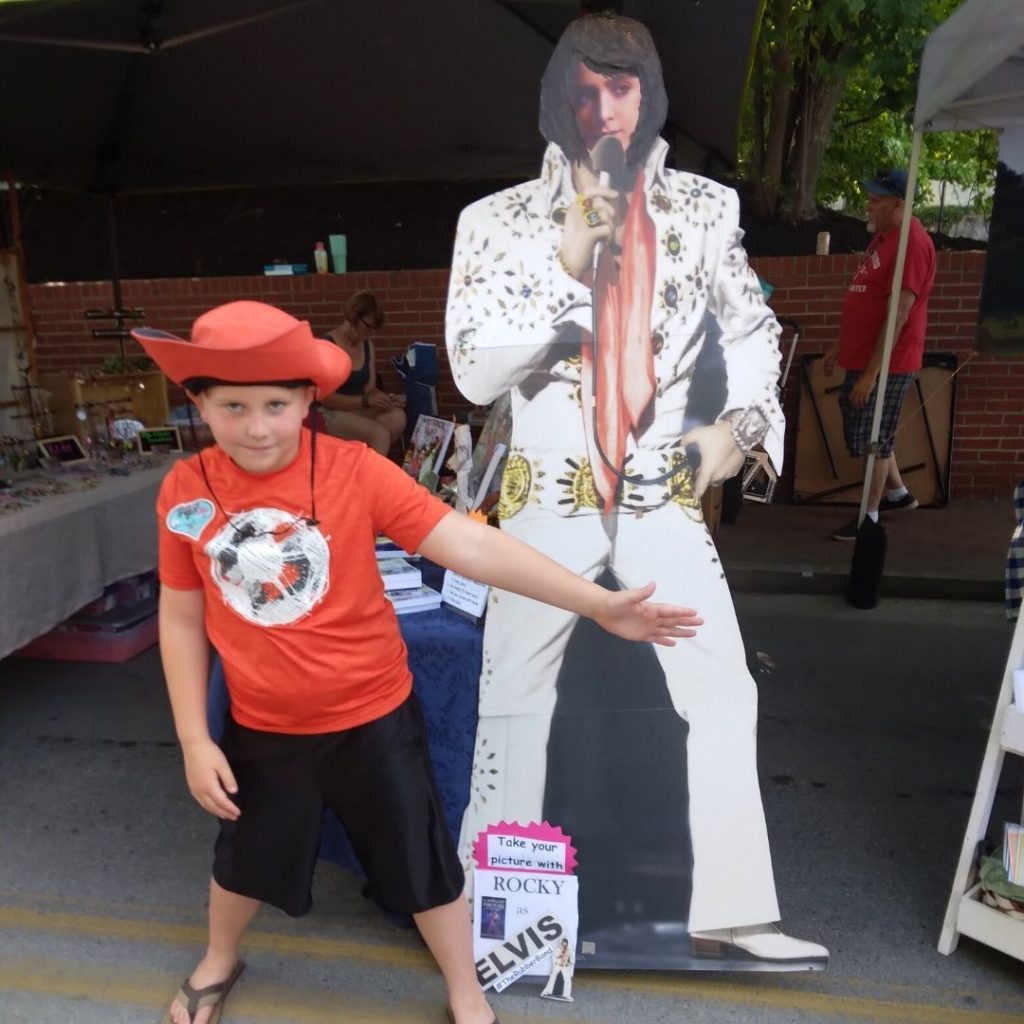 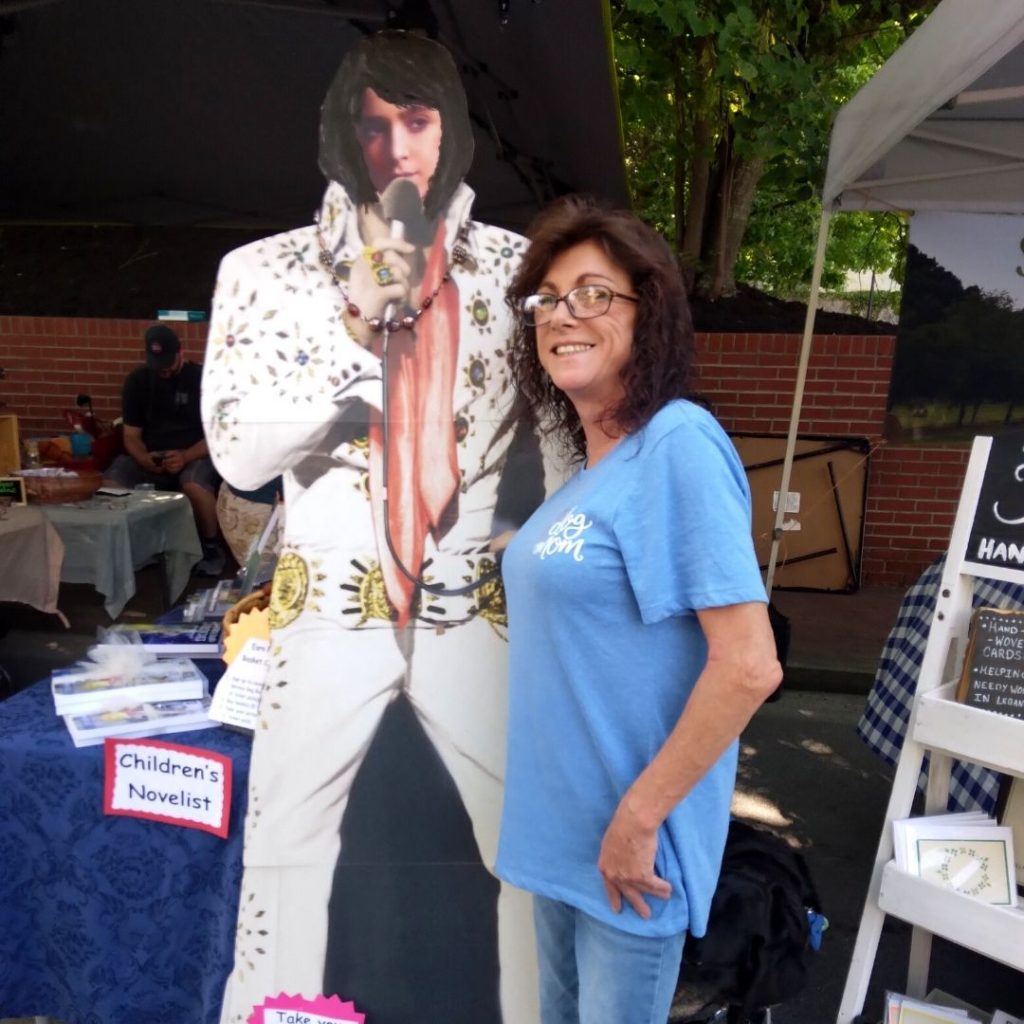 One had to show off her Elvis tattoo. 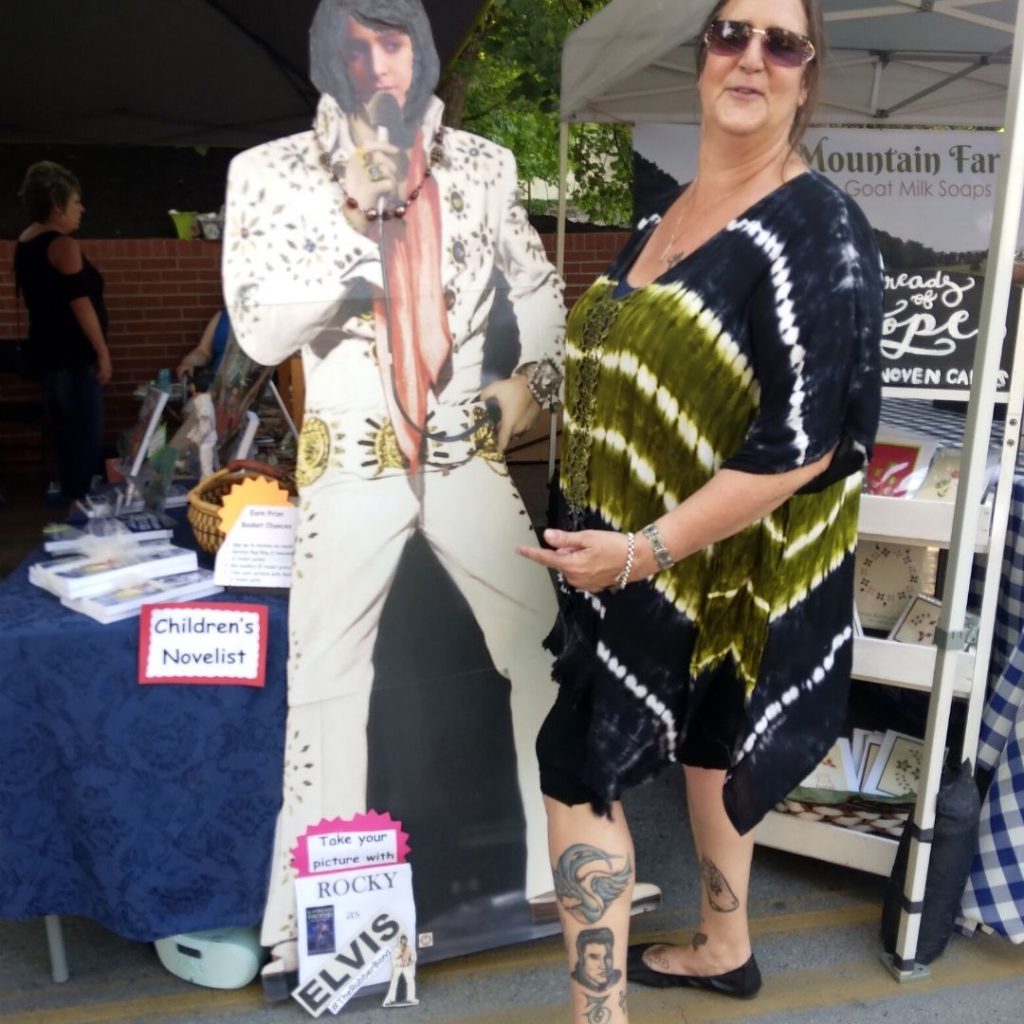 Yes, It’s hard work to be a writer, but I love my dream career. No matter what pains I must go through, I am going to keep bringing my writing babies into the world. 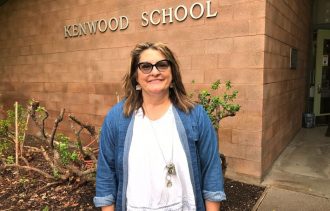 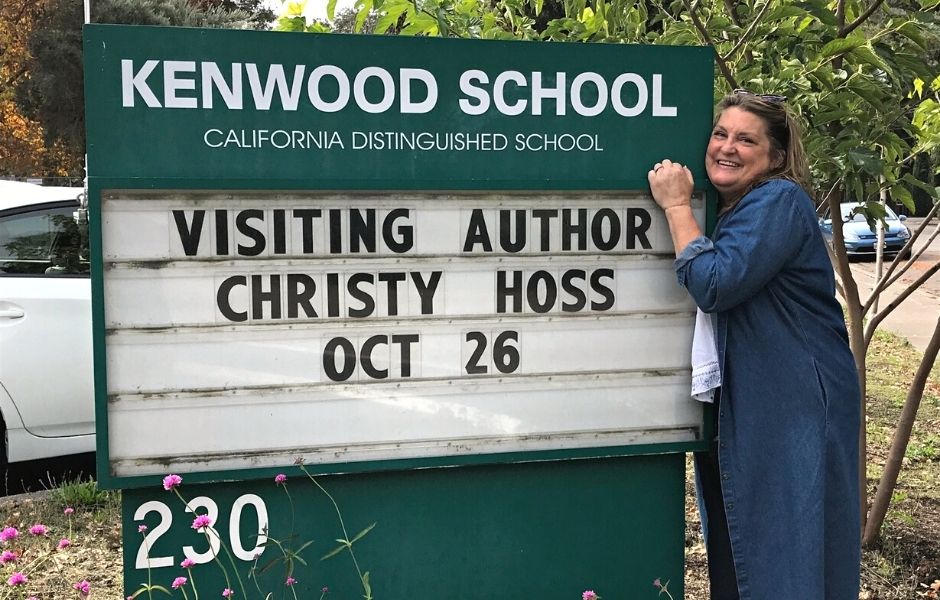 I felt like a little girl on Christmas morning opening the biggest present, and finding exactly what she wanted!

When Sharon Watson, Kenwood School’s librarian, invited me to come do an author visit assembly, I was over-the-top thrilled. I taught at Kenwood for ten years and filled various creative roles. To me, it was the happiest place on earth to teach but I gave it up to pursue my writing dreams. 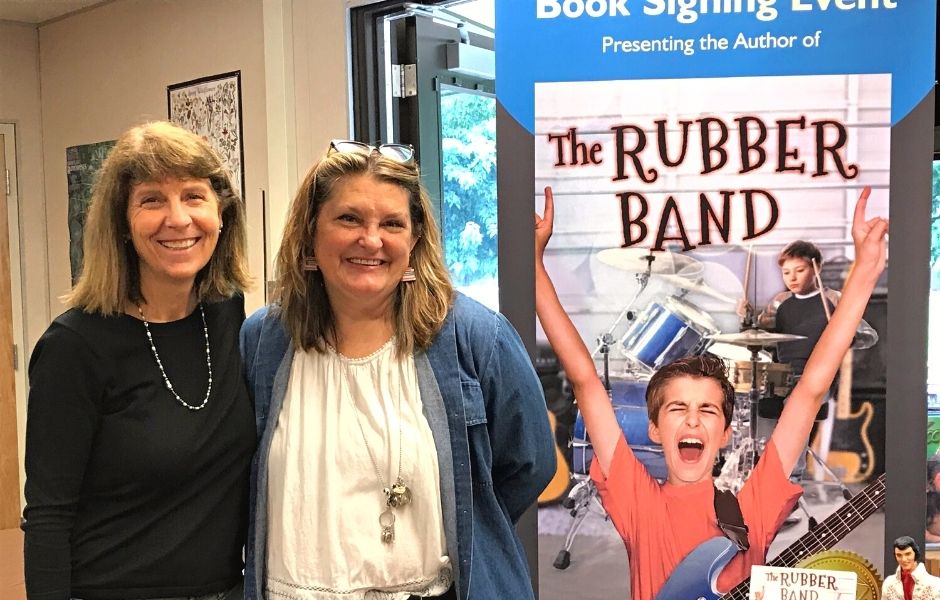 Facing the assembled children, I told the story of my journey since second grade. I didn’t bore them with lengthy tales of my history but encouraged them to keep hoping and dreaming and work hard at whatever their dream is, in order to make it come true.

Just for fun, I gave volunteers the opportunity to shoot rubber bands through holes on a game board, reminding them that shooting a rubber band is how Eddie got in trouble and they should only use rubber bands for their intended purpose or end up in the principal’s office. 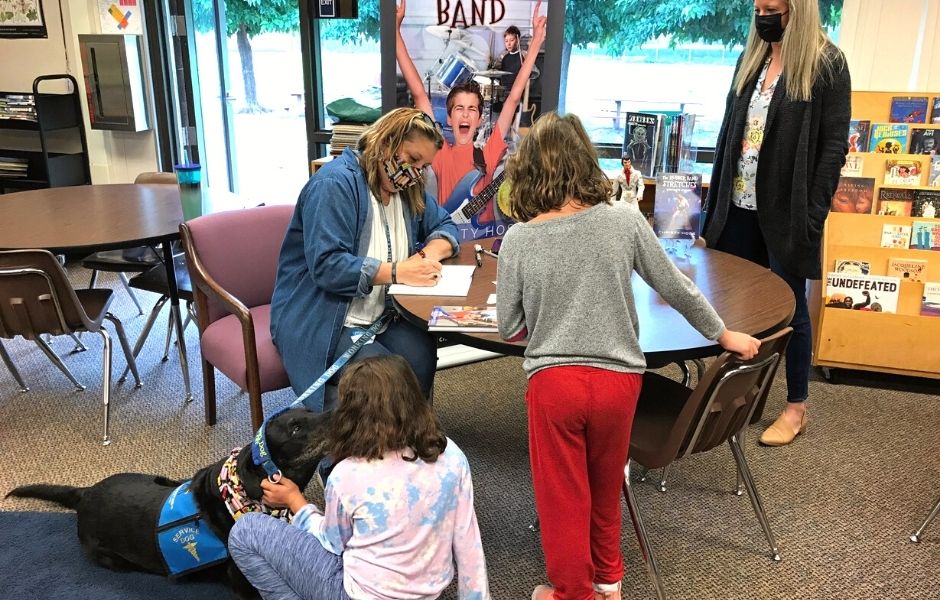 The students had many great questions and I had to opportunity to speak to the fifth-grade class as they are doing a NANOWRIMO project. 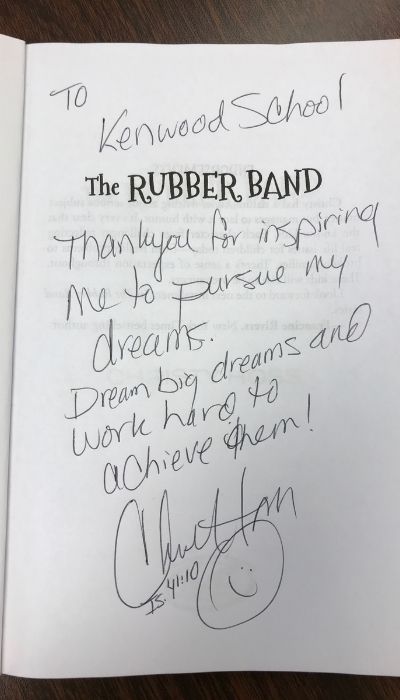 It’s always a pleasure to watch the faces of the children as I sign books. But, just like a day ending at Disneyland, I didn’t want to leave the happiest place on earth. Alas, I must return to the hardest part of being an author – writing. 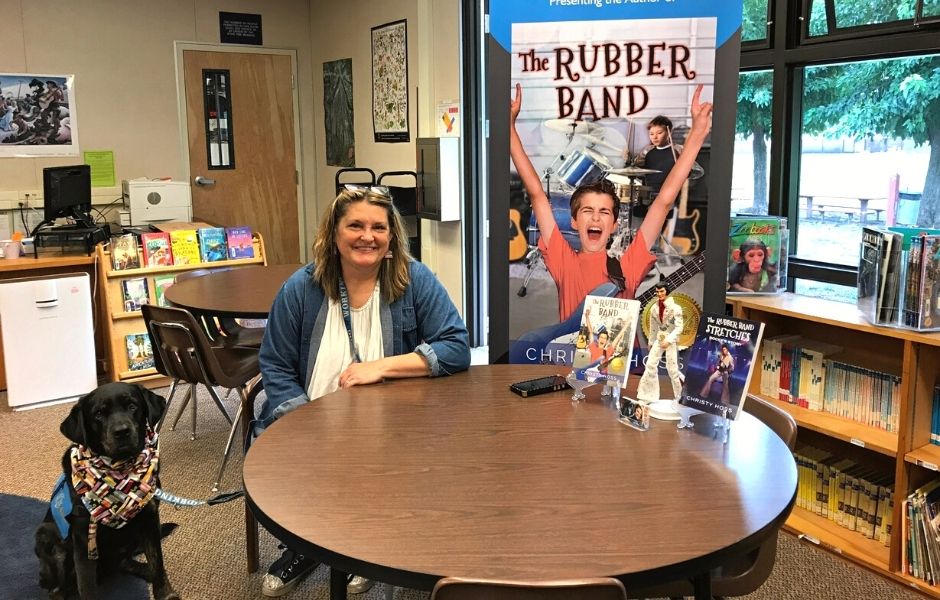 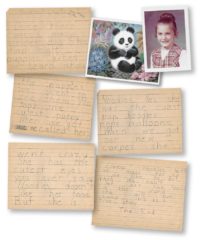 When I was a second grader, my teacher, Mrs. Olson, told me I was destined to be a writer.

I wrote five pages about my dog and won first place in the writing contest Mrs. Olson created for her second-grade writers. That was in 1972 and I never forgot her words, always dreaming of becoming an author. 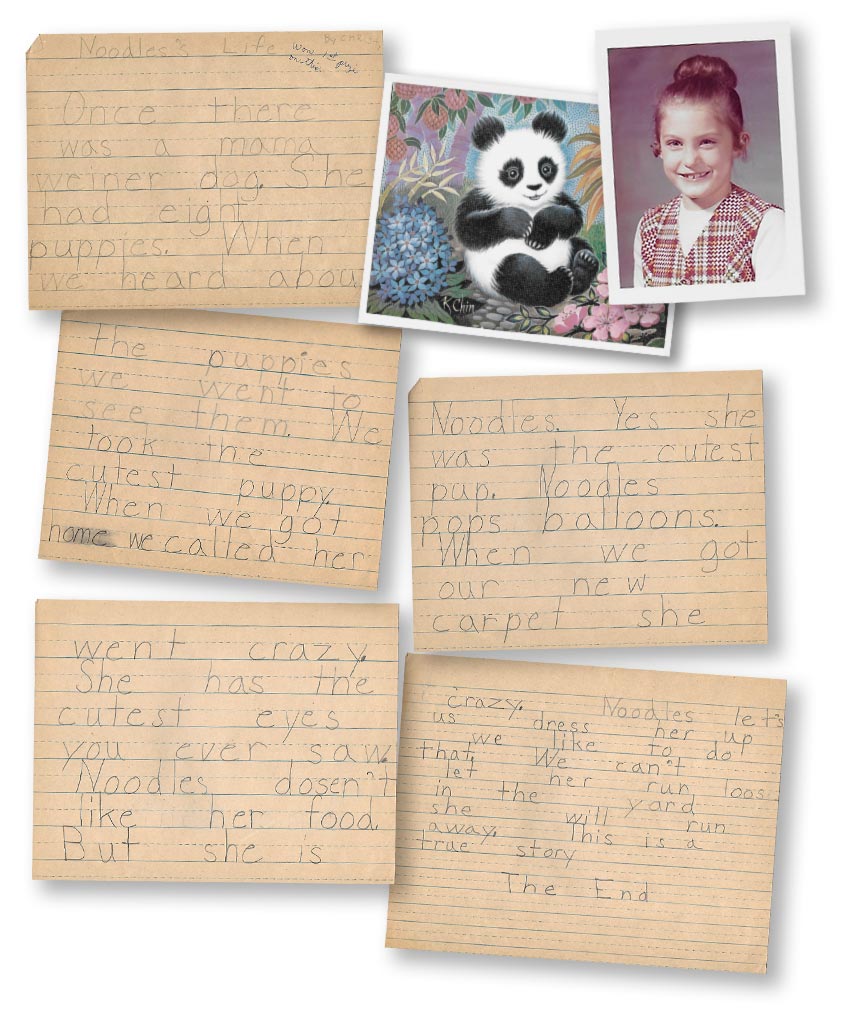 There is no feeling more exhilarating than opening a box to find a dozen books with your name on the front. I compare the process to giving birth. There’s the conception, the long haul of putting words into story… and that is only the beginning.

For the most part, the process can take a lot longer than nine months of carrying a baby. Only writers can understand how much work it takes to finally hold your baby, the fruition of hard work in your hands: A book with your name on the over.

It begins with an idea.

Thanks to my friend Susan K. Stewart, who listened to my idea and said the three words authors love to hear, “Send it in,” I have a middle-grade book series. 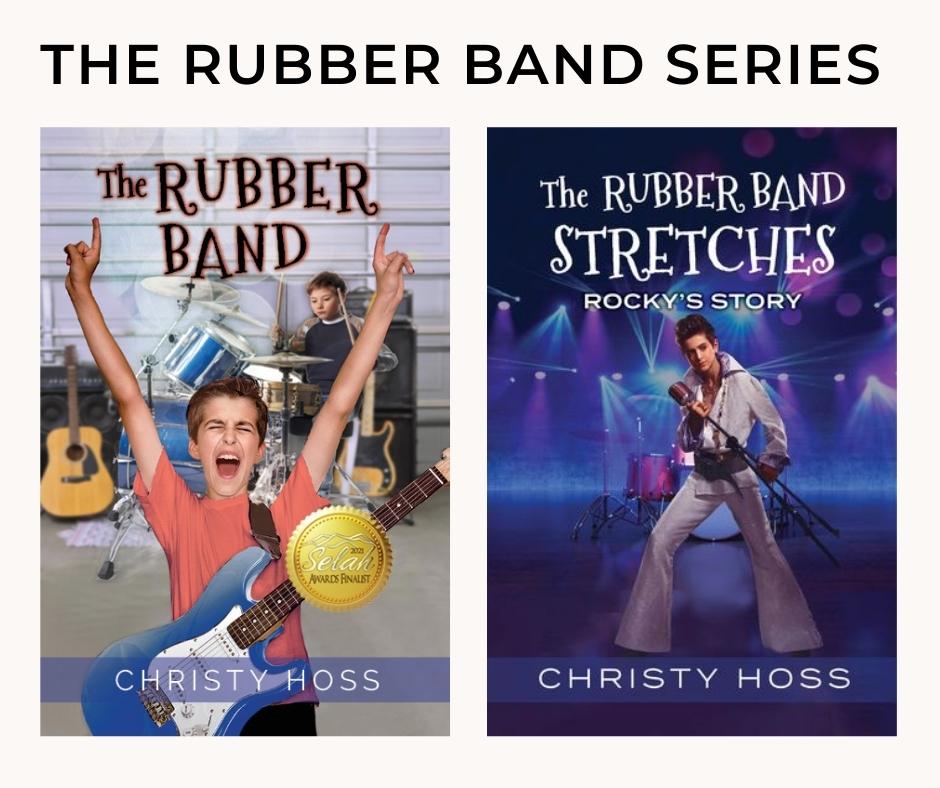 Susan and I became friends, and she shared with me her idea for a book that was burning on her heart. I loved her idea. I wish I could have said those three words to her, but because she is an editor, she had an “in” with the publisher.

Susan had a dream, one that involved her love of donkeys. 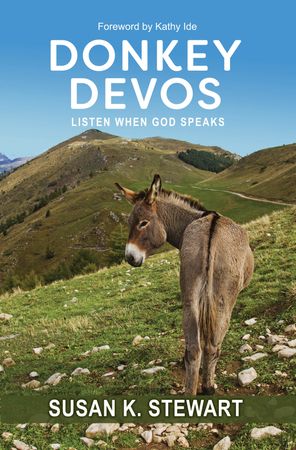 Recently, her dream was fulfilled. A box of books arrived at her doorstep and when she opened them up, her dream for Donkey Devos was born. I love it when dreams come true.

But because I have dreamed of writing my entire life and recently birthed my second book, to me, the entire process truly is my labor of love. 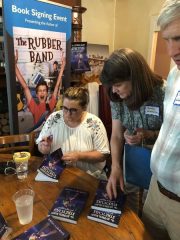 As COVID restrictions began to lift, thirty-plus people were able to enjoy fun, games, and prizes and tons of pizza at Joey’s Pizza (the very one mentioned in the books!). I ordered too much food, so many people went home with a large pizza, but that’s okay because Joey’s is the best pizza in my opinion. 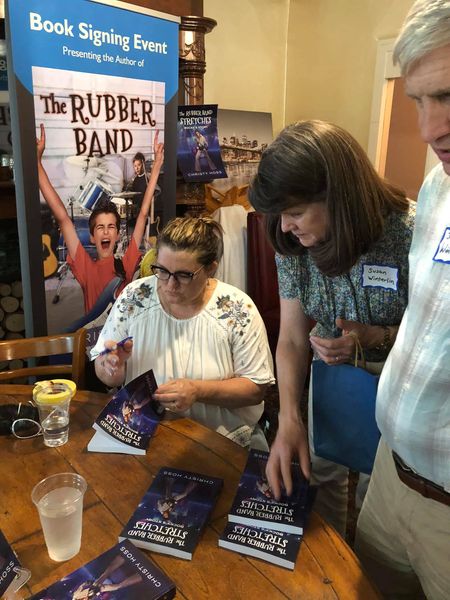 If you weren’t there, you missed out on the rubber band shooting game, searching for seven Lego Elvis hidden in plain sight, an ice-breaking Bingo game, photo opportunities to be Eddie on the first book’s cover, and posing with Rocky as Elvis, all earning tickets to put in the bag of your favorite raffle prize.

After all the activity and thanking everyone for their support, I sat down to sign books. 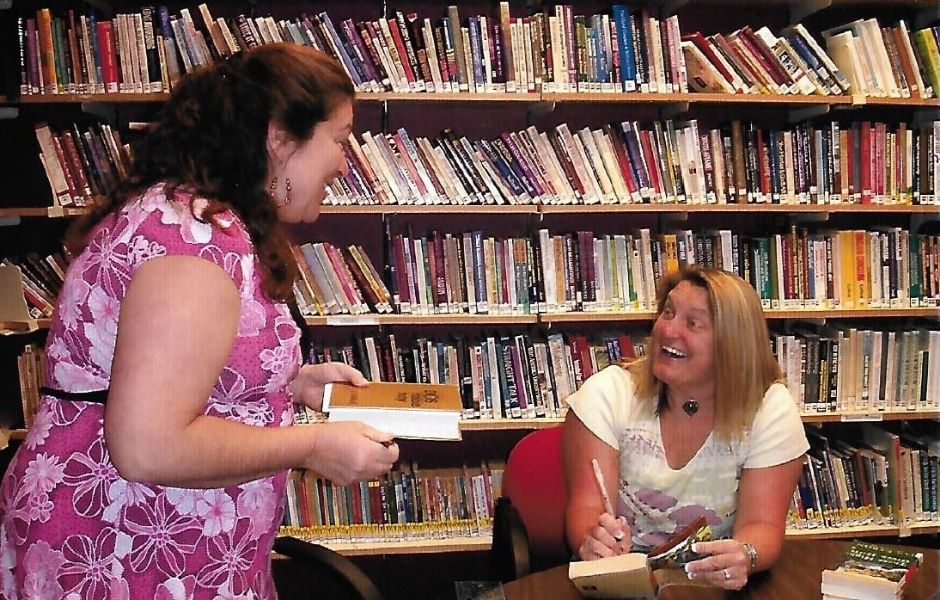 Years ago, when I dreamed of being an author, a friend of mine set up vision photos and I took mine, pretending to sign books. That photo came to life, my dream came true, and for the first time, I felt like a real author.

The day’s activities blurred together; I can hardly remember it. But one thing I sticks out that I’ll never forget: the people I love who helped me fulfill my second-grade dream of being a writer honored me by celebrating my victory. For that reason, I am truly grateful. 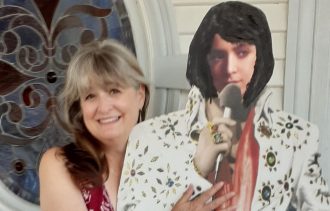 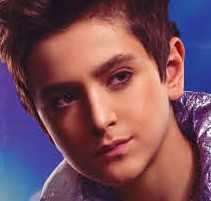 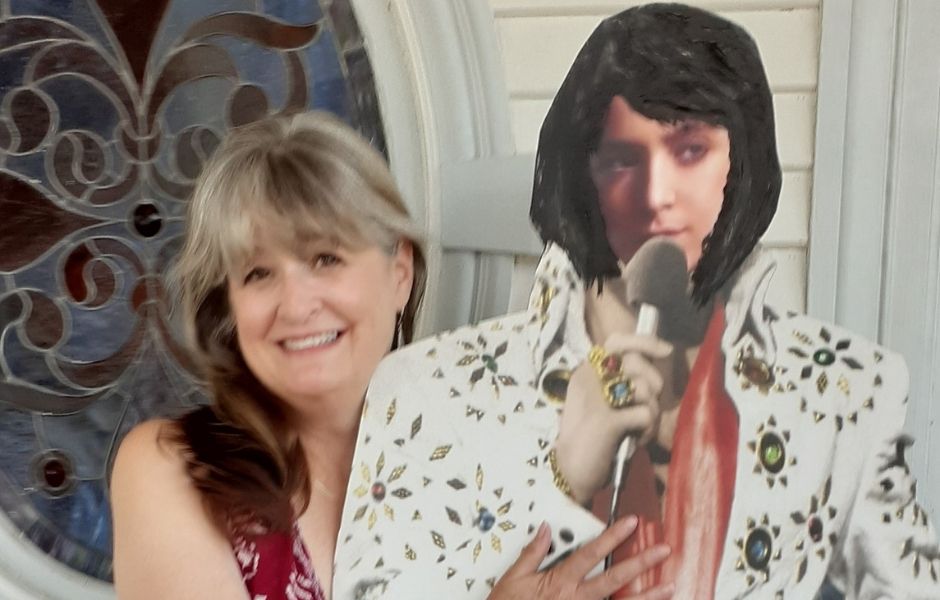 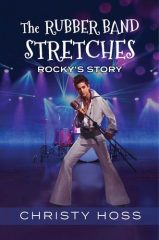 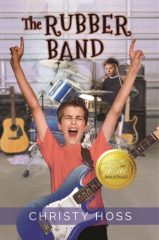