Have you ever been separated from someone you love for a long period of time?

For a dog, a few minutes can seem like a lifetime to be gone from your master. Recently, my handler, Christy had COVID and tried to get better at home, but after a week of struggling, she left for the emergency room.

I was left at home because she was too sick to have me by her side. A few hours later, her husband Kevin joined her in the ER. Christy made arrangements for me to be taken care of by friends.

I wasn’t sure what to think.

I felt like I was on vacation because at our friend’s house, I was allowed to be just a dog, whereas at home, I’m a working dog. At this house I had no one to alert on.

Later, when our good friend and trainer, Sarah, was able to take care of me, it was like being at a doggy spa.

Yep, she gave me a bath (I hate baths). But at Sarah’s I had my girlfriend Woflie, my good friend, Kermit, and two other dogs to play with, not to mention two diabetic people for whom I could do my job as a service dog and alert them to low blood sugars.

But what happened to my mom, Christy? Where is she? Would I see her again?

We only know that we miss our people. I really missed my mom. It felt like forever since she kissed my nose and said goodbye. It turns out both Kevin and Christy had to stay in the hospital to get better. In people time, it was four days later when I was reunited with my mom. 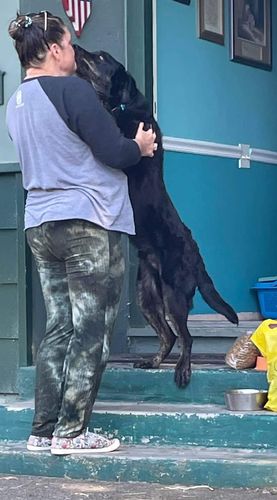 I was so happy to see her, I think my tail almost wagged off.

In dog time, a few minutes can feel like forever. Dog people know what I’m talking about. We dogs just want to be with our people and miss you no matter how short a time you’re gone.